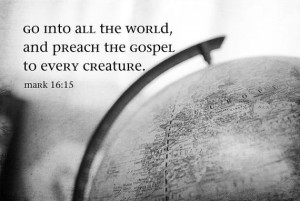 Here are 71 famous missionary quotes from the Bible to the present day.

There’s so many more that great missionary quotes that haven’t made it this list! If you have one you’d like to share please do so in the comments below.

I pray this will encourage you as you are empowered to represent Jesus as Missionaries, as Kingdom-Carriers and Glory-Bearers in your towns and cities wherever you are in the world.

Let us point people to Jesus Christ – the first missionary.Let us reach the unreached, love the unloved and give hope to the hopeless.
1.

“The mark of a great church is not its seating capacity, but its sending capacity. – Mike Stachura” [Tweet this

2. “Never pity missionaries; envy them. They are where the real actions is—where life and death, sin and grace, Heaven and Hell converge.”- Robert C. Shannon

3. “I have but one passion: It is He, it is He alone. The world is the field and the field is the world; and henceforth that country shall be my home where I can be most used in winning souls for Christ.” – Count Nicolaus Ludwig von Zinzendorf

“Missions is not for the hyperactive Christians in the church. Missions is the purpose of the church” [Tweet this]

“If Jesus Christ be God and died for me, then no sacrifice can be too great for me to make for Him.– C.T. Studd” [Tweet this]

“No one has the right to hear the gospel twice, while there is someone who hasn’t heard it once. – Oswald J. Smith” [Tweet this]

“Any church not involved in the Great Commission has forfeited its biblical right to exist. – Oswald J. Smith” [Tweet this]

8. “People who do not know the Lord ask why in the world we waste our lives as missionaries. They forget that they too are expending their lives… and when the bubble has burst, they will have nothing of eternal significance to show for the years they have wasted.” – Nate Saint, missionary martyr.

9. “I have but one candle of life to burn, and I would rather burn it out in a land filled with darkness than in a land flooded with light.” – John Keith Falconer

“God isn’t looking for people of great faith, but for individuals ready to follow Him. – Hudson Taylor” [Tweet this] 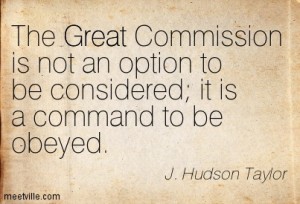 “The Great Commission is not an option to be considered; it is a command to be obeyed.” [Tweet this]

“If the Great Commission is true, our plans are not too big; they are too small. – Pat Morely” [Tweet this]

14. “Go ye’ is as much a part of Christ’s Gospel as ‘Come unto Me.’ You are not even a Christian until you have honestly faced your responsibility in regard to the carrying of the Gospel to the ends of the earth.” – J. Stuart Holden

15. “I believe that in each generation God has called enough men and women to evangelise all the yet unreached tribes of the earth. It is not God who does not call. It is man who will not respond!” – Isobel Kuhn, missionary to China and Thailand

16. When James Calvert went out as a missionary to the cannibals of the Fiji Islands, the ship captain tried to turn him back, saying “You will lose your life and the lives of those with you if you go among such savages.” To that, Calvert replied, “We died before we came here.”

Go stand by the gates of hell, and hear the damned entreat you to go to their father’s house and bid their brothers and sisters and servants and masters not to come there.

Then look Christ in the face – whose mercy you have professed to obey – and tell Him whether you will join heart and soul and body and circumstances in the march to publish His mercy to the world.” – William Booth, founder of the Salvation Army

17. “It is not in our choice to spread the gospel or not. It is our death if we do not.” – Peter Taylor Forsyth

“If the Great Commission is true, our plans are not too big; they are too small. – Pat Morely” [Tweet this]

19. “People who don’t believe in missions have not read the New Testament. Right from the beginning Jesus said the field is the world. The early church took Him at His word and went East, West, North, and South.” – J Howard Edington

20. “It is possible for the most obscure person in a church, with a heart right toward God, to exercise as much power for the evangelisation of the world, as it is for those who stand in the most prominent positions.” – John R. Mott

21. “In no other way can the believer become as fully involved with God’s work, especially the work of world evangelism, as in intercessory prayer.” – Dick Eastman, president of Every Home for Christ (formerly World Literature Crusade)

“What’s your dream and to what corner of the missions world will it take you? – Eleanor Roat, missions mobiliser” [Tweet this]

“We can reach our world, if we will. The greatest lack today is not people or funds. The greatest need is prayer. – Wesley Duewel, head of OMS International” [Tweet this]

“Love is the root of missions; sacrifice is the fruit of missions. – Roderick Davis” [Tweet this]

25. “Missionary zeal does not grow out of intellectual beliefs, not out of theological arguments, but out of love.” – Roland Allen

“If you take missions out of the Bible, you won’t having anything left but the covers. – Nina Gunter” [Tweet this]

27. “If the Church is ‘in Christ,’ she is involved in mission. Her whole existence then has a missionary character. Her conduct as well as her words will convince the unbelievers and put their ignorance and stupidity to silence.” – David Bosch

28. “The concern for world evangelisation is not something tacked on to a man’s personal Christianity, which he may take or leave as he chooses. It is rooted in the character of the God who has come to us in Christ Jesus.

Thus, it can never be the province of a few enthusiasts, a sideline or a specialty of those who happen to have a bent that way. It is the distinctive mark of being a Christian.” – James S. Stewart

30. “The Christian is not obedient unless he is doing all in his power to send the Gospel to the heathen world.” – A. B. Simpson

“Prayer is the mighty engine that is to move the missionary work. – A. B. Simpson” [Tweet this]

“The will of God – nothing less, nothing more, nothing else. – F. E. Marsh (also attributed to Bobby Richardson)” [Tweet this] 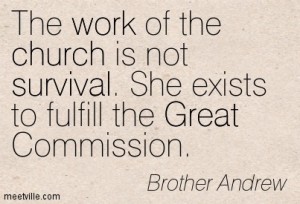 “The work of the church is not survival. She exists to fulfill the Great Commission.” [Tweet this]

34. “If missions languish, it is because the whole life of godliness is feeble. The command to go everywhere and preach to everybody is not obeyed until the will is lost by self-surrender in the will of God. Living, praying, giving and going will always be found together.” – Arther T. Pierson

36. “A congregation that is not deeply and earnestly involved in the worldwide proclamation of the gospel does not understand the nature of salvation.” – Ted Engstrom, World Vision

37. “To stay here and disobey God – I can’t afford to take the consequence. I would rather go and obey God than to stay here and know that I disobeyed.” – Amanda Berry Smith

“God uses men who are weak and feeble enough to lean on Him. – Hudson Taylor” [Tweet this]

“To know the will of God, we need an open Bible and an open map. – William Carey” [Tweet this]

43. “Is not the commission of our Lord still binding upon us? Can we not do more than now we are doing?” – William Carey

44. “The spirit of Christ is the spirit of missions. The nearer we get to Him, the more intensely missionary we become.” – Henry Martyn, missionary to India and Persia

45. “He is no fool who gives up what he cannot keep to gain that which he cannot lose.” – Jim Elliot, martyr who lost his life in the late 1950s trying to reach the Auca Indians of the Ecuador.

46. “We are debtors to every man to give him the gospel in the same measure in which we have received it.” – P. F. Bresee, founder of the Church of the Nazarene 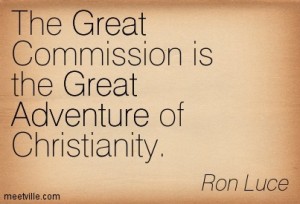 “The Great Commission is the Great Adventure of Christianity.” – Ron Luce” [Tweet this]

48. “In the vast plain to the north I have sometimes seen, in the morning sun, the smoke of a thousand villages where no missionary has ever been.” – Robert Moffat, who inspired David Livingstone

“Sympathy is no substitute for action. – David Livingstone” [Tweet this]

51. “Can’t you do just a little bit more?” – J. G. Morrison pleading with Nazarenes in the 1930s Great Depression to support the missionaries.

“Lost people matter to God, and so they must matter to us. – Keith Wright” [Tweet this]

“The Bible is not the basis of missions; missions is the basis of the Bible.- Ralph Winter, US Center for World Missions” [Tweet this]

“Some wish to live within the sound of a chapel bell; I wish to run a rescue mission within a yard of hell. – C.T. Studd” [Tweet this]

“Christ wants not nibblers of the possible, but grabbers of the impossible. – C.T. Studd” [Tweet this]

“The mission of the church is missions. – Oswald J. Smith” [Tweet this]

“We talk of the Second Coming; half of the world has never heard of the first. – Oswald J. Smith” [Tweet this]

59. “There is nothing in the world or the Church—except the church’s disobedience—to render the evangelisation of the world in this generation an impossibility.” – Robert Speer, leader in Student Volunteer Movement 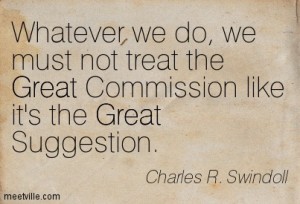 “Whatever we do, we must not treat the Great Commission like it’s the Great Suggestion. – Charles Swindoll” [Tweet this]

“If God calls you to be a missionary, don’t stoop to be a king. – Jordan Grooms (also credited to G. K. Chesterson, Thomas Carlyle, and Charles Spurgeon” [Tweet this]

63. “World missions was on God’s mind from the beginning.” – Dave Davidson

64. “In our lifetime, wouldn’t it be sad if we spent more time washing dishes or swatting flies or mowing the yard or watching television than praying for world missions?” – Dave Davidson

“Let my heart be broken with the things that break God’s heart. – Bod Pierce, World Vision founder” [Tweet this]

66. “No reserves. No retreats. No regrets.” – William Borden

67. “If ten men are carrying a log – nine of them on the little end and one at the heavy end – and you want to help, which end will you lift on?” William Borden, as he reflected on the numbers of Christian workers in the US as compared to those among unreached peoples in China.

68. “The reason some folks don’t believe in missions is that the brand of religion they have isn’t worth propagating.” – Unknown

69. “Someone asked “Will the heathen who have never heard the Gospel be saved?” It is more a question with whether we – who have the Gospel and fail to give it to those who have not – can be saved.”– Charles Spurgeon

“The Gospel is only good news if it gets there in time. – Carl F. H. Henry” [Tweet this]

“Our God of Grace often gives us a 2nd chance, but there is no 2nd chance to harvest a ripe crop. – Kurt von Schleicher” [Tweet this]

What are your favourite missionary quotes that should be on this list? Share them in comments below.